After almost 2 weeks, I almost feel like the Mozilla Festival was a dream, but an awesome one, one where people were very productive, one where people were inspired and inspiring. I once again thought I’d have a very tiny role simply as a participant this year, but just like last year, I was proved wrong. Warning, this is no way told in a chronological order.

I told everyone at the day-before-mozfest staff meeting that I couldn’t believe I was there. Pomax (and I) decided that I should go to MozFest after all less than a week before the event, so I had to book a flight, get registered, check in with my coworker, and rearrange my schedule somewhat in virtually a day. No regrets though.

I will say that with this year’s MozFest coming up, it spurred me to finally finish my presentation poster project that I had started at MozFest last year. I’ve submitted it as a possible new starter project, so if you like it, let them know!

Last year though, it felt kind of hectic being a Human API, being a gopher for some of the session facilitators, attending some sessions, putting together the thimble project, and then running the Thimble table at the demo party. It was great to have something “tangible” at the end, but it was tiring. I figured planning so late meant I wouldn’t do anything else except attend, but of course that never happens.

For one, I went to my first Webmaker Mentor Community Call as well (in October) where they talked about having people similar to Human APIs but basically marked as Webmaker Mentors. I thought it’d be a great way to contribute at least a little (though it took some wrangling to get the information and to join). On a side note, it didn’t end up being much work since mentors weren’t particularly visible and weren’t announced to participants.

In a recent blog post, I talked about the new tutorial system in Thimble Webmaker and the starter makes I converted from inline comments to proper tutorials. I think it’s a great feature and while credit really goes to Tom and Pomax for coding it, people liked seeing it implemented in actual makes. Super encouraging to see my work have an impact. One of the big reasons I started wondering why I should attend.

Interestingly, because Tom, Pomax, and I were the only ones that really knew how tutorials worked, we ended up hanging out in the ‘Teach the Web” area the first morning talking, teaching, and helping to build. Obviously, this happened through MozFest, but particularly day 1 morning.

The first day (right off the plane!) started with the monthly mentor call, but this time mostly in person at the London office, which was great. Afterwards, everyone who was at the office got invited to the all staff meeting where we actually got to learn about all the new stuff that’s been happening and the new tracks at MozFest.

Since I had been working on the tutorial stuff, I was asked to do the tutorial for the I believe in the open web because… support Mozilla make. So I actually put that together after the staff meeting. I also got invited to stay at the office to have pizza and hang out with some of the volunteers. It was great meeting some of them. 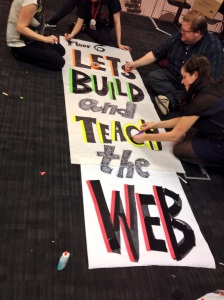 During the day before the science fair, I headed over early and got the chance to “hack a t-shirt” to mark it with mentor on the back (which all the mentors did). If only we had all the materials of the hack a t-shirt session, I think our shirts would’ve been even better!

I also spent some time helping out with the sign making. I thought we ended up with one of the best signs! It was very much a collaborative effort with a team of 6 or 7 people in total who helped.

On Day 1, we attended the Game Day session on purposely breaking things while still in development, because otherwise huge problems might be encountered (e.g. turning off the main database, or the cache). This was in the context of news sites, but obviously it applies to any web or tech context. There was even talk on how it applies to HR.

On Day 2, I ended up separating from Pomax to attend @dajbelshaw’s discussion session on the new Web Literacy Standard and how it integrates with Open Badges. It was great to hear how creators have thought about integrating the two and how educators might think of applying them. I didn’t take any notes, but my notes from the data camp session last week covers many of the same ideas.

During the opening plenary on the first day, @remixmanifesto showed off collaboration in Webmaker using TogetherJS where @thornet and Pomax played around with rainyday.js.

People loved the video and Brett did an excellent job cutting it (as the raw video is 20 minutes long or some such), so when the idea came up to make some JavaScript starter projects, I thought we really should do a starter make for people to be able to play with rainyday.js themselves. I finished it this week, so here it is! Remix Your Own Rainy Day

Like last year, we saw a lot of cool stuff at science fair, during mozfest, and at the demo party at the end. You can see an even longer list on the demo party page, but there was this theme of cool things being done with turning digital objects to physical ones.

Use VoxelJS to create a 3D thing and then print it out to make it into a paper version!

At the Maker Party, they had a similar idea type setup to design something in Minecraft then using a 3D printer (MakerBot) to print it.

Some things of course are not shown at the fair and demo party. I’m sure there were a lot of great things made, but I was especially impressed with one that I saw. Perhaps not widely known, Chloe (one of the game floor space wranglers) and one of her colleagues designed their own set of werewolf game cards, turning it into werefox with new roles added in too. I’ve never played the game, but I thought the cards were awesome! They even created a badge to go with it.

Mark Surman talked about how MozFest is a great place to make connections and start working on things, then we can spend the rest of the year continuing those efforts. I plan to host some maker parties, and contribute to getting HiveBC going. I can only hope that I will have done enough to have something to talk about at MozFest next year too.